The term ‘linguistic questionnaire’ will here be restricted to questionnaires which are meant to produce data representing a language system, for use in its description or typological characterization. Such a questionnaire is a set of items – called “questions” for short – about how certain things are expressed in the target language.

Linguistic stimuli to systematically work off a functional domain commonly take the form of a questionnaire. A domain is spelled out down to the level of typological grammatical categories. The questions are meant to check whether the language possesses a certain category or what kinds of grammatical distinctions it makes in the domain.

Category #1 may be illustrated by two quite different questionnaires. The series Archivo de Lenguas Indígenas de México, last edited by Yolanda Lastra (1974ff), comprises a set of grammars all of which translate a set of model sentences. The questionnaire was elaborated by Ray A. Freeze and is described in Lastra 1993f.1 Typical model sentences include these:

Here, the documentation of a language consists of the translation of a set of several hundred standardized sentences into the target language. The sentences are chosen in such a way as to maximize chances that their translations will exhibit the central grammatical categories and vocabulary of the language.

The other specimen of category #1 is the questionnaires on tense, mood and aspect, illustrated on the page on example translation.

Questionnaires of category #2 consist of such non-linguistic stimuli as are used in semantics-driven data collection. Here is another example of a picture series representing local prepositions: 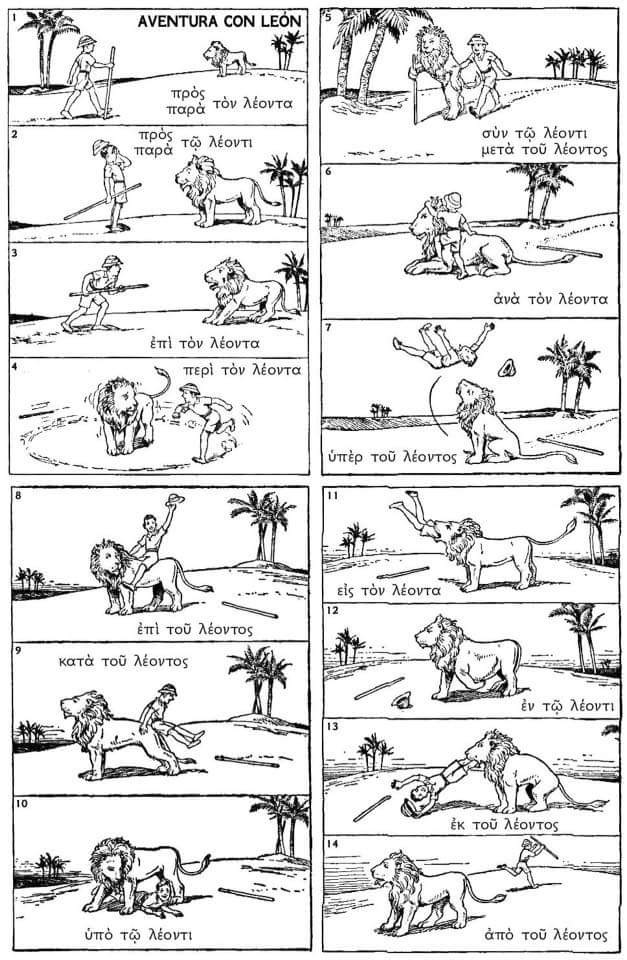 As in the picture series for the English local prepositions, this is, again, not systematic from an onomasiological point of view, but geared to Ancient Greek.

A notable example of category #3 is the “Lingua Descriptive Studies Questionnaire” (Comrie & Smith 1977). Its questions are at a metalinguistic level, so that they can only be understood and answered by a trained linguist. The very first question is representative of this style:

1.1.1.1. Does the language make any difference between direct speech and quoted speech?
If so, how is this indicated?

The concepts implied by such questions may be operationalized in the form of test frames in which expressions of the object language have to be inserted. This method, however, is already one of linguistic analysis rather than data collection.

1 The questionnaire is apparently not publicly available.